I went down to the Mall last Thursday to check out the Catalonia section of this year’s Smithsonian Folklife Festival. Perfect day for it.

Just a few hours earlier, the Mall had been filled with tens of thousands of people watching the Fourth of July concert and fireworks, but by morning, every trace of them was gone. The Park Service is really good about clean-ups.

This Human Tower Team, Colla Vella dels Xiquets de Valls, can trace its history back more than 200 years. At the Festival, they gave a small sample of what they do. Here’s a video of a somewhat more impressive performance:

Of course I went for the food. I had Catalon Pa Amb Tomàquet, which is garlic and tomato toast, with Serrano ham. Lousy picture, great sandwich.

When US troops arrived in Europe after D-Day in WWII, Europeans were impressed with the height of Americans soldiers. Things have changed since then, especially in Scandinavia and Holland, where the local teenagers now tower over typical US visitors.

The only place in Europe where I’ve ever felt taller than most of the residents was in Spain. I thought about that as I watched the dance of the Associació de Geganters i Grallers d’Oliana.

Powders for street décor. They’re used to create “carpets” like this one:

It’s that time of the year again.

“Museum Day Live!”, Smithsonian magazine’s annual celebration of American museums, takes place across the USA this Saturday, 23 September 2017. You can get free admission tickets for any of the 1,000+ participating museums, galleries, and cultural institutions at the magazine’s Museum Day Live! website.

The website makes it easy to find the participating museums in your area.

Most of the recent festivals have followed a similar format, celebrating a US state or region, a foreign culture or area, and/or a traditional occupation. In 2016, for instance, the two main themes were “Basque: Innovation by Culture” and “Sounds of California.”

This year’s festival was easily the most fascinating and entertaining I’ve ever visited, because the main attraction was a tribute to…Circus Arts!

And it was wonderful!

One of the displays was this classic Circus Wagon.

You could watch close-up performances by clowns and jugglers…

…and not-so-close-up performances by acrobats and trapeze artists.

In addition to the open-air displays, the festival included full performances in its own Big Top, and in one of the Smithsonian buildings. But for me, the best part was the panel discussions featuring circus people talking about their careers and training and lives in the circus. Heard some awesome stories during my two visits to the festival.

“Museum Day Live!”, Smithsonian magazine’s annual celebration of American museums, takes place across the USA this Saturday, 24 September 2016.   You can get free admission tickets for any of the 1,000+ participating museums, galleries, and cultural institutions at the magazine’s Museum Day Live! website.

The website makes it easy to find the participating museums in your area.

That news about Breaking Bad and the Smithsonian led to my following a string of Breaking Bad hyperlinks on the Internet, and, yes, I have waaaay too much time on my hands.

It’s obvious I’m obsessed with the show, and I thought I knew it well.  I’ve seen the charts showing how clothes in Breaking Bad are colour-coded to reflect mood and narrative, I know the source of each episode title, and I can explain the various meanings of “Felina.”

But now I’ve found this video, which takes allusion to a much deeper level:

And it’s back to the hyperlinks again….

The Smithsonian already has Archie Bunker’s Chair and the Ruby Slippers from The Wizard of Oz.   It has the 60 Minutes Stopwatch and Kermit the Frog,   And it recently acquired Don Draper’s suit and fedora,

Yesterday, a certain famous porkpie hat was added to the collection.

Breaking Bad has come to the Smithsonian, but you won’t be able to check it out until 2018, when the Smithsonian’s National Museum of American History will open a major new exhibition on American culture.  It’s a lock to make every tourist’s Must-Do list for a visit to Washington, and I’m pretty certain that hat will be in every Smithsonian gift shop.

Walter Hartwell White and Jesse Pinkman were on hand for the presentation, which included a number of other Breaking Bad props, including two Tyvek suits from The Greatest TV Series Ever.

The two actors other than Bryan Cranston who were under consideration for the role of Walter White were Matthew Broderick and Jon Cryer, and what a very different show that would have been. 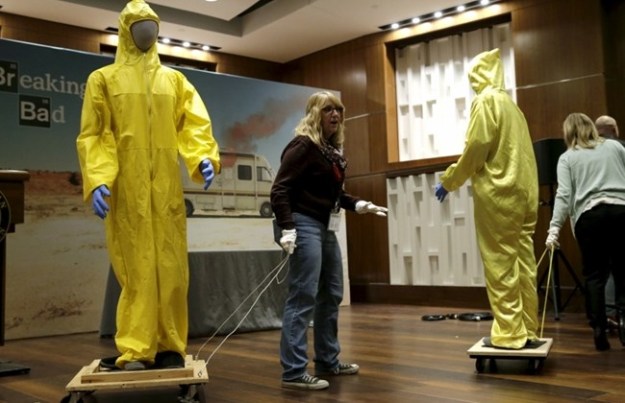