On the left, Scott and Zelda Fitgerald, sometime in the 1920s. On the right, Gerald and Sara Murphy at Cap d’Antibes beach in 1923.

Dick and Nicole Diver, the central characters in F. Scott Fitgerald’s novel, Tender is the Night, are based partly on the Murphys and partly on Scott and Zelda Fitgerald themselves.

Fitzgerald thought the book was his best work. It was the last novel he completed.

I mentioned that I planned to re-read Calvin Tomkins’ 1962 New Yorker article about the Murphys and the Fitzgeralds, and posted a link. I’ve just finished it, and it’s even more impressive than I remembered it being.  It’s a beautifully written piece about some extraordinary people.

Here once again is a link for “Living Well Is the Best Revenge”, along with my highest recommendation. 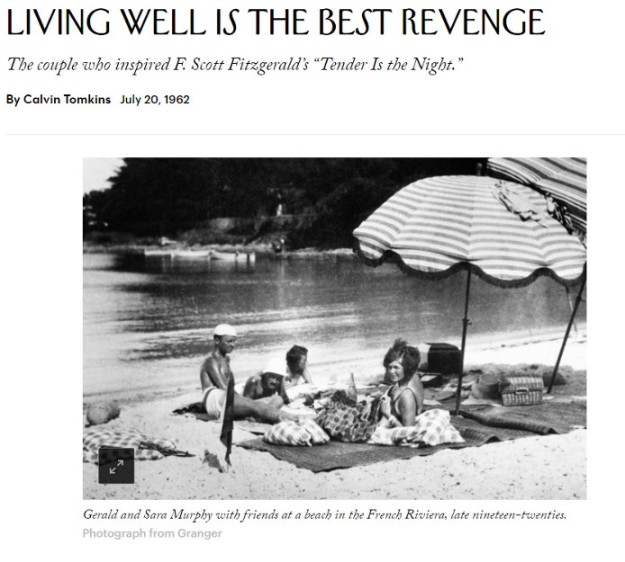 It’s called “The Party’s Over.”

I’ve been watching episodes from the first few seasons of Mad Men  recently, and it strikes me how much they resemble the short fiction that used to appear in the New Yorker, around the time Mad Men takes place.  Cheever.   John O’Hara.   Stories that capture the small but infinitely significant moment.

Took a little day-trip to Philadelphia on Thursday, for my first visit to the Barnes Foundation.

The Barnes Foundation holds the collection of  Dr Albert Barnes, who developed an  antiseptic drug called as Argyrol around the turn of the 20th century.  The drug made him a millionaire–in 1907 dollars-at 35.  He sold the company for ~$6 million in 1929, before the stock market crash.

Barnes used to money to develop one of the great private art collections, specializing in impressionist, post-impressionist, and early modern paintings.  “Barnes’s collection grew to include 69 Cézannes — more than in all the museums in Paris — as well as 60 Matisses, 44 Picassos, and 181 Renoirs. The 2,500 items in the collection include major works by (among others) Henri Rousseau, Modigliani, Soutine, Georges Seurat, Edgar Degas, and Vincent van Gogh”. –Wikipedia

The collection is valued today at somewhere north of $25 billion.

It’s a beautiful building, and apparently faithfully re-creates the environment that originally held the collection. There is some controversy, however, about whether the Philadelphia institution should even exist. The fascinating movie The Art of the Steal bills itself as “The True Story of a Multi-Billion Dollar Heist, and How They Got Away With It”, and tells one version of how the collection ended up here. 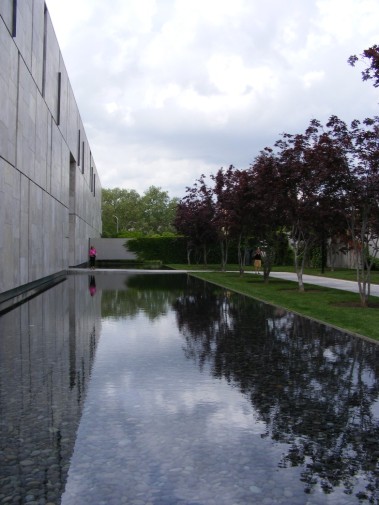 The collection is–overwhelming.  The visit left me w/a new appreciation for Rousseau, Soutine, and Modigliani, in particular.  (It did not, however, make me re-think my growing distaste for Renoir, who was Dr. Barnes’ favorite painter–181 paintings, remember?  I suppose the man who amassed this amazing cultural monument is allowed one lapse of taste).

Afterwards, I had a v nice early dinner at the Rose Tattoo Cafe, which is about a block from the Barnes.  No pictures of the meal, because the interior was too dark, but I had Spicy
Louisiana Shrimp and Cajun Dirty Rice.  The shrimp was described on the menu as both “Oven Roasted” and “BBQ”, which was a little confusing.  No matter.  It was delicious  The serving was three v big shrimp.

“Big shrimp”.   James Thurber said that he was once able to slip a description of a building into the New Yorker that said it was “…a little big and pretty ugly”. 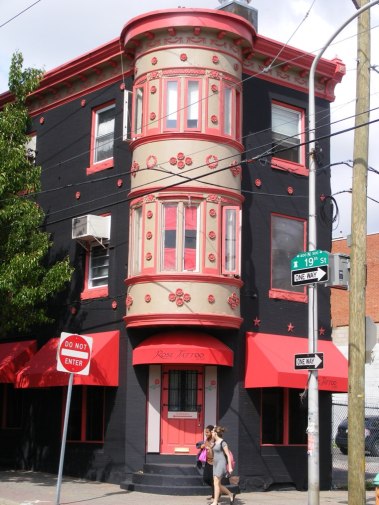