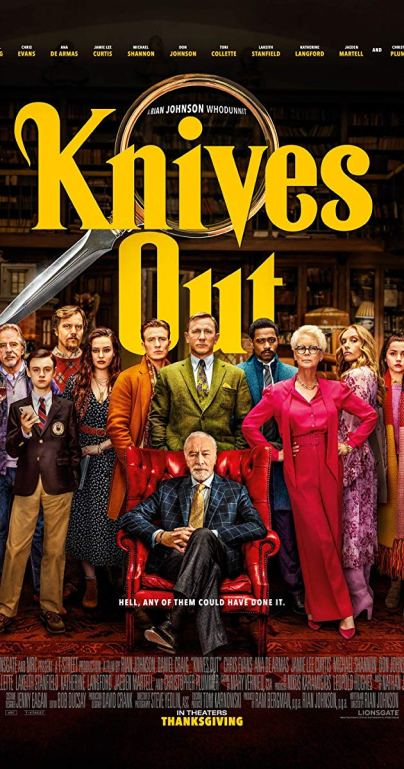 I think I must share a common sensibility with Rian Johnson, the writer/director of the upcoming movie Knives Out, because the film so perfectly matches my idea of what a purely entertaining movie should be. It’s a murder mystery set in a posh but isolated location, peopled by diverse and glamourous characters who are all hiding secrets.

And the location matters. A snowbound English country house is an ideal setting, but a snowbound train works as well. Even a luxurious boat will do if it’s in a suitably exotic part of the world, just as long as there’s a room large enough to assemble all the suspects and expose the killer(s) in the closing moments of the film.

Knives Out has Agatha Christie’s bloody fingerprints are all over it, and Rian Johnson happily acknowledges his debt to the best-selling fiction writer of all time, with the possible exceptions of Shakespeare and the authors of the New Testament. Johnson has improved on his inspiration by adding a dash of wit to the mix; Christie’s works are conspicuously devoid of humour.

He’s also assembled the kind of All-Star cast that brings in an audience for those remakes of Murder on the Orient Express and Death on the Nile that earn nice profits every decade or so, even though everyone in that audience found out whodunit years ago.

And what a cast it is! The film has Chris Evans,  Jamie Lee Curtis, Michael Shannon, Don Johnson, Toni Collette(!), Lakeith Stanfield, and Christopher Plummer. Best of all, there’s James Bond himself, Daniel Craig, playing a detective with the intriguing surname of “Blanc”.  I can only hope he introduces himself as “Blanc. Benoit Blanc.” For reasons yet to be explained, Craig plays the part with a Southern accent.

Here’s the latest trailer for Knives Out:

And here’s the original one:

Knives Out opens on 27 November 2019, the night before (US) Thanksgiving Day. Can’t wait for this one.

Professor Plum, in the Library, with the Candlestick 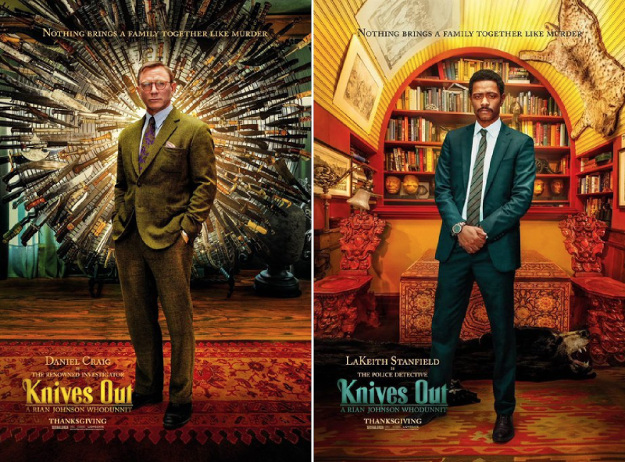 I posted an item about the new adaptation of Agatha Christie’s Murder on the Orient Express back in June, when the first trailer was released. Today we got a new one.

That earlier posting has a good deal of information about the 2017 version, and a video of the trailer for the 1974 film, as well, so I won’t repeat it here.

Instead, a personal note:

When I was a kid, I had three Dream Trips:  A cruise on the Nile, a ride on the Orient Express, and a visit to Schloss Neuschwanstein.

The inspiration for the first two is pretty obvious. At a certain age, Christie’s books were much more interesting than my earlier favourites, the works of the great Franklin W. Dixon. Her detectives had more depth than Frank and Joe Hardy, too, although, in retrospect, not all that much.

I know now that I’ll never cruise the Nile, because I’ll never go anywhere in the Middle East, for obvious reasons.

The ride on the Orient Express is out as well. The original Orient Express is long gone. Its successor, the Venice-Simplon Orient Express train, tries to remind passengers of the glamour of international train travel in the early 20th century. Its London-Venice trip, leaving at 10:30 AM and arriving at 6:25 PM the next day, costs £2,365 ($3,205). I’m just not that nostalgic.

But one dream came true. I spent Thanksgiving Day 2005 at Neuschwanstein. You can walk up the winding road to the castle in about 30 minutes, or you can do as I did, and pay €5 to be carried up in a horse-drawn carriage.

It was off-season, with few visitors and no lines. Because of the sparse crowd, Neuschwanstein’s tour guides let us linger in the magnificent rooms as long as we wanted.

An unforgettable experience. It was one of the highpoints of my life.

The trailer for the new film version of Agatha Christie’s Murder on the Orient Express was released yesterday, and it looks awesome!

Kenneth Branagh, who directed, also stars as Hercule Poirot. His revisionist interpretation of the famous Poirot mustache must be seen to be disbelieved.

I loved the big budget, all-star Christie movies of the 1970s, and was a bit shocked to realize that the Albert Finney version of Murder on the Orient Express was released 43 years ago. There have been at least two television adaptations since then. The David Suchet version, which ITV ran on Christmas Day, 2010, is currently available on  US Netflix, The less said about the 2001 version starring Alfred Molina, the better.

A large part of the probable target audience for Murder on the Orient Express will go into the theatre already knowing whodonit. We see Christie movies for the same reasons we watch new versions of A Christmas Carol or the Sherlock Holmes stories:  Not to see how they end, but to see a new interpretation of an old favourite.

The film will be released on 10 November 2017. If it’s reasonably successful, can Death on the Nile be far behind?

The first few times I saw this movie, I was uncomfortable with the scene in which Poirot gathers all the suspects together and reveals his solution to the mystery. It felt airless and claustrophobic, and seemed to go on forever.

It was only later that I realized how successful the director had been. He’d made me feel as if I were one of the suspects, itching to get out of there, and hoping it would all end soon.