It’s that time of the year again, when restaurateurs counter the industry’s traditional late-summer slump by offering special deals to attract diners. Between late July and mid-September, you can find a Restaurant Week promotion in almost every American city where “going out for a good meal” implies something a little more exciting than having dinner at Burger King.

Washington, DC, and its suburbs have three overlapping Restaurant Week programs: one based in Bethesda, featuring restaurants in suburban Maryland, one in Alexandria, Virginia, and one covering the entire metropolitan area. It’s not unusual for some restaurants to extend their Restaurant Week specials for a second week, or even longer, which means that in August, I tend to dine very well, at a relatively low cost.

First stop for me this summer: PassionFish Bethesda.

I’ve gotten into the habit of almost always beginning RW at one of the Passion Food Hospitality group’s restaurants, like PassionFish Bethesda, District Commons, or the now-closed and much-missed Acadiana, and I’ve never had any regrets.

This time, I started with a Lobster and Carrot Ginger Bisque, with lobster (duh), carrots, and peas. 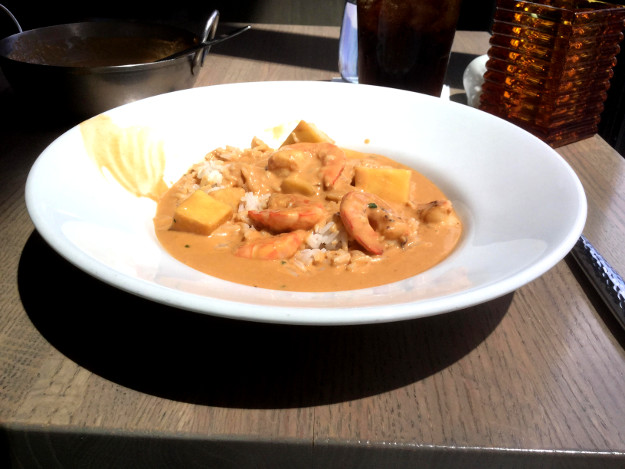 The Red Thai Curry, with a hint of Kaffir lime, had just the right heat for my Western tastes, and the golden pineapple was a nice complement. Served with shrimp over jasmine rice.

A wonderful dessert, but I kept thinking that it looked like it belonged with another meal. It was a very “European” dessert following an Asian main, resulting in a slight culture clash. That didn’t stop me from enjoying this Chocolate Mousse Crunch with strawberry coulis.

At the Bethesda Metro Station

It was good to see the waters flowing again at the entrance to the Bethesda Metro Station. In its earlier years, Metro put a lot of effort into making some of the approaches to station entrances architecturally interesting. That’s no longer a priority, unfortunately.

A Cautionary Note to Sedentary Americans

If you plan to travel beyond the tourist highlights, or to use the excellent Paris Metro, be prepared to do some serious climbing.

While most of Paris, especially area along the Seine, is relatively flat, the Montmartre district is built on steep hills.  That, plus the fact that Paris’s multi-leveled Metro system has only a few escalators or elevators, means that even the 80-year-old ladies who live here sometimes develop thighs like Tom Daley.