Disney’s new, live-action version of Cinderella is scheduled to open on 13 March 2015, which is about the same time that Into the Woods should be finishing its theatrical run.  Clever Disney!

CGI has reached the point at which it’s feasible to make live-action films with all the fantasy effects that used to be possible only in animated movies.   Clever 21st Century!

On the other hand, Michael Bay.

Two final items, and then no more Into the Woods postings until after the holidays.  The movie’s release is only a few days away, so it’s time for me to start obsessing about something else.  I hear there’s a show called Better Call Saul that I might be interested in catching….

Anyhow, here’s the lead from The Hollywood Reporter’s excellent “Making of…” article about Into the Woods.  Entitled Perverted Wolves, Cheating Wives and a Fired 10-Year-Old: The Dark Path to Disney’s ‘Into the Woods’, it’s a must-read. 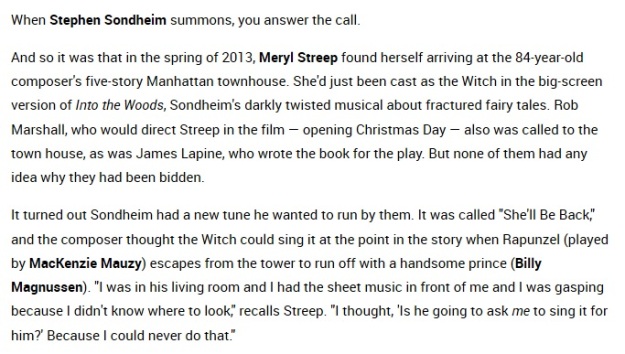 And finally, Disney has released two more snippets from the movie:

Obsessed much?  Yeah, I’ll admit it.  It’s been a long time since I’ve been so excited about the release of a film.  Into the Woods has always been one of my two favourite Sondheim musicals.   (Sweeney Todd, obviously.)

Opens on Christmas, but I’ll wait to see it until after the first of the year.

Here’s another snippet from Into The Woods — Anna Kendrick’s Cinderella runs away from her prince (Chris Pine), but gets stuck “On the Steps of the Palace.”

And the Playbill “Featurette” containing a preview of Meryl Streep’s performance that I mentioned last month is now available on YouTube.

Disney Studios hosted a bi-coastal sneak preview of Into the Woods last night, with simultaneously screenings in New York and at Disney Studios in Burbank.  Reviews of the film are embargoed until mid-December, but Pete Hammond has posted a long, detail-rich article titled “Into The Woods” Sings Its Way Straight Into The Oscar Race at Deadline Hollywood.  There was a post-screening Q&A featuring director Rob Marshall, screenwriter James Lapine, and cast members Meryl Streep, Emily Blunt, Christine Baranski, Tracy Ullman, Chris Pine, and James Corden.

It’s v much worth reading!

Hammond mentions the aborted Penny Marshall plan to film Into the Woods back in the 90s. Looking at the cast list, I stand by the comment I posted last year: 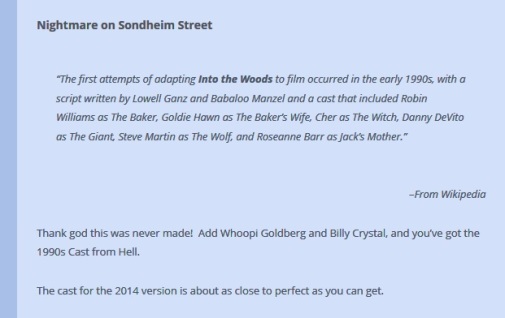 I can’t embed this “Featurette” from Playbill, which gives us a preview of Meryl Streep’s performance in Into the Woods.  I can only urge you to click the link—it’s magical.

What a beautiful Christmas present!

This one has music!  And looks great.

Into The Woods opens Christmas Day.

I wonder if this was intentional.  There’s a new teaser for Disney’s version of Into the Woods, but it was released by Disney Australia.  Strange.  Let’s see if the video stays up or or if Disney has it removed.

Anyway, you can ignore the “January 2015” opening date at the end of the trailer.  Australia’s in a different time zone. so they’re a couple of weeks behind us “Down Under”.

Two things jump out about the video:  No one sings—The songs from the play are only hinted at in the background music.  And it looks like Disney is really trying to keep Johnny Depp’s look as  the Wolf a secret until the film is released.  The most we see in the video or the stills is a paw reaching around a tree.

Disney has released a few more stills from the film version of Stephen Sondheim – James Lapine musical Into the Woods, which is set for release on Christmas Day 2014.  There have been rumours that Disney has lightened the story to make it more “family-friendly”—you can bet that the Wolf will no longer be anatomically correct, as he was in the original—but Sondheim says he and Lapine, “worked out every change from stage to screen with the producers and with Rob Marshall, the director…I can happily report that it is not only a faithful adaptation of the show, it is a first-rate movie”.

James Corden as the Baker and Meryl Streep as the Witch. 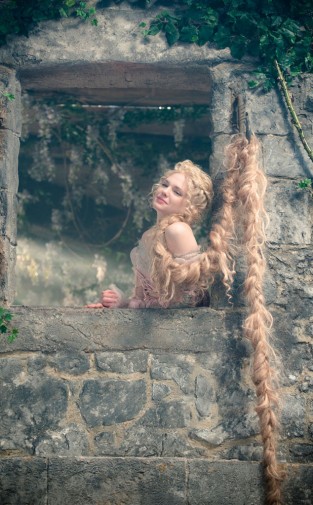 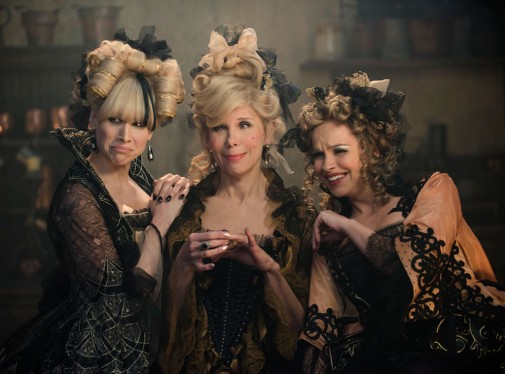 Lucy Punch and Tammy Blanchard as Cinderella’s evil stepsisters and Christine Baranski as her evil stepmother. 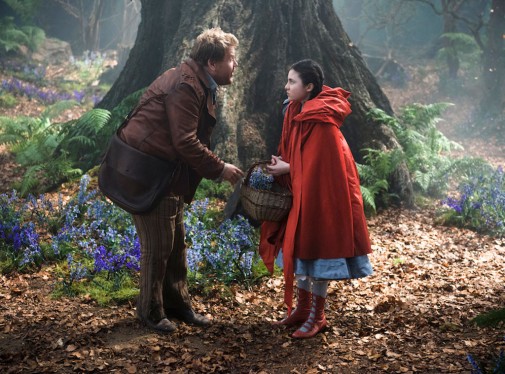 Daniel Huttlestone as Jack and Tracy Ullman as his mother.

Johnny Depp was his generation’s Joseph Gordon-Levitt–an intensely charismatic actor who took a lot of chances, and somehow became a major star while playing edgy, off-beat characters. It’s also not impossible that there’s a locked room in Depp’s house which holds a portrait of him painted while he was in his 20s that has aged terribly, because Depp sure hasn’t–at 50 (50!) he still looks almost as good as he did on Twenty-One Jump Street, 25 years ago.

But while the Pirates of the Caribbean movies have been huge money-makers, his work in the last decade has been disappointing. That might turn around this year. In addition to Transcendence, he plays The Wolf in Into the Woods, and, according to IMDB, he has at least 20 projects in development.

Transcendence is scheduled to be released on 17 April 2014.

More Songs about Buildings and Food
Create a free website or blog at WordPress.com.