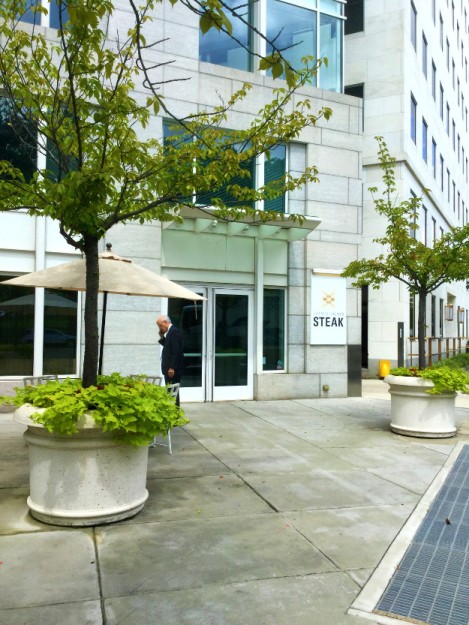 For those arriving late, we’re about halfway through my annual review of summer Restaurant Week in Washington, DC. Every August, I sample a mix of restaurants that I’ve never tried before and places that I’ve especially enjoyed during earlier visits. I usually wind up with a 60/40 split, favouring the newbies.

Charlie Palmer Steak, a sleek and elegant power lunch hotspot on Capitol Hill, falls into the second category. I hadn’t dined there in a couple of years, but I had fond memories of the restaurant’s delectable meals and first-rate service.

It’s pronounced “shu-go”, and it’s a simple pasta sauce. The pasta, in this case, was house-made black pepper Cavatelli, and the protein was Shenandoah Valley Lamb.

I would love to have this as a main sometime. It was that good. 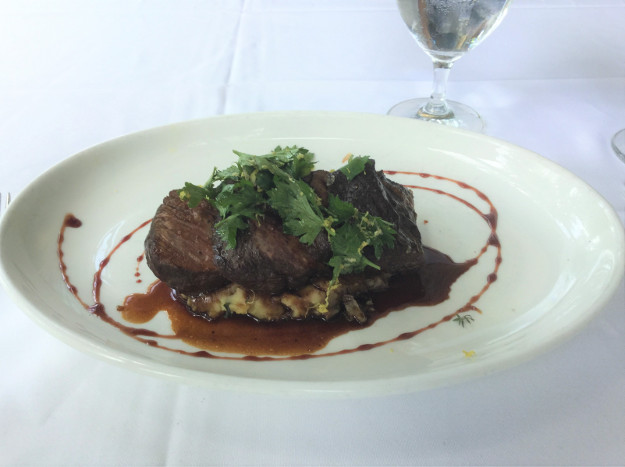 The glazed beef short ribs, however, were not as wonderful as I remembered them from the last time I had them at Charlie Palmer.  Not bad, by any means, but simultaneously fattier and less tender.

They were served on olive oil crushed potatoes, with lemon, parsley, and horseradish.

Déjà vu. Yesterday at The Occidental, the starter and the dessert were the highlights of the meal, and outshone the beef main course. Same thing here.

The dark chocolate pave with salted caramel and a blackberry sorbet was a knockout.

After an hour or so at the “Infinite Space” installation at ARTECHOUSE, I headed over to Capitol Hill for a late lunch.

Bistro Bis is a 10-minute walk from the Senate Office Buildings north of the Capitol, which should tell you pretty much all you need to know about its clientele. The interior is beautifully done, with multiple dining areas on two levels. It’s a charmer. 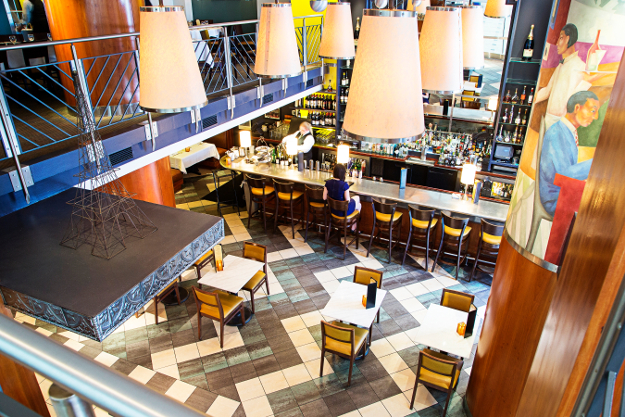 I’d talked to a friend a few days earlier, and the conversation turned to duck confit, as my conversations so often do. It occurred to me then that since I’d titled my current life-improvement project as the “Bastille Day Revival”, and since dining well was a key part of the Revival agenda, there’d be no better way to start it than by ordering that classic French dish. And where could I find one of the best versions of duck confit in Washington? Well, it wasn’t simply chance that brought me back to Bistro Bis.

The duck was served on a bed of wilted spinach and beans, with baby shallots and a good gastrique. Excellent as ever. I could live on this.

I chose Pommes Frites, with spicy harissa and rosemary aïoli dipping sauces, for my side dish. 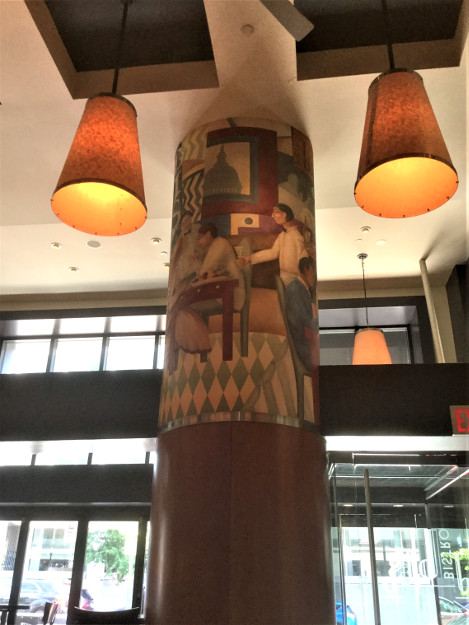 This meal made me happy. Thanks to ARTECHOUSE and Bistro Bis, the Bastille Day Revival was off to a great start.

Meanwhile, back during Restaurant Week…

Sonoma Restaurant & Wine Bar is on Capitol Hill, a block away from the Library of Congress and two blocks from the U.S. Capitol itself. That means it gets an interesting clientele, like the two people sitting at the table next to me, who spent their lunchtime rather indiscreetly discussing the inner workings of a Republican representative’s office.

Virginia Fried Oysters on a sweet Anaheim pepper purée with a house-made bacon jam. Anaheim peppers are mild, but give some heat.

The main, Cinnamon Braised Beef Short Ribs with shaved Brussels sprouts, buttermilk mash, and pan jus, was the star of the meal. The Brussels sprouts were a little undercooked, to my taste, but the short ribs were excellent.

The Goat Cheesecake with marshmallow fluff and maple walnut syrup was tasty, but, once again, the portion was small. Desserts should be excessive, and give the diner those wonderful pangs of guilt one gets from hedonistic overindulgence.

I don’t have much to say about this meal. It was all right, but I not special enough to make me plan another trip to this restaurant.

Last Friday’s lunch at Bistro Bis was my final meal during the official 2017 Winter Metropolitan Washington Restaurant Week, but some of the best is yet to come. As expected, a number of places, including two of the best restaurant groups in Washington, are extending the RW format for another week. And Alexandria’s RW begins a week after that.

Bistro Bis offers an updated version of traditional French bistro fare. It’s close to the Capitol, so if you’re political, you’re likely to see some familiar faces at lunch. You may also overhear some indiscreet conversations at the next table, if you’re lucky. And nosey.

I rarely order salad in a restaurant. For one thing, I make brilliant, everything-in-the-pantry salads at home.

(Dried cherries? Sounds good. Toss in some walnuts, too. And I’ll chop up some tarragon to mix with the cress. Oh, almost forgot—I still have half a jar of artichoke hearts. And let’s crumble some of that leftover bacon on top.*  A little bleu cheese would go well with that.)

But I’ve been starting with soup for most of the week, and the Salade Panaché, with mesclun greens, candied almonds, manchego cheese, dried apricots, and wine vinaigrette sounded tempting.

This is what I came for: Confit de Canard Touloussiene. When I see Duck Confit on a menu these days, I don’t bother to read further.

The  duck confit at Bistro Bis was v good, but not quite on the level of versions of the dish I’ve had over the last year at Bastille in Alexandria** and Bistrot Victoires in Paris.***

The skin on the duck leg was crisp and crunchy, and the meat was tender. It was served with white beans, duck sausage, and frisée, and a banyuls vinegar-thyme gastrique.

Is it ever possible to go wrong with chocolate? This Tarte au Chocolat, with
a graham crumble and caramel ice cream, was a perfect ending to an excellent meal.

Charlie Palmer Steak is part of the Charlie Palmer Group, a collection of three hotels and 17 restaurants (eight in New York City, four in Northern California, four in Nevada, and one here in DC).  The big, bright Washington restaurant is a couple of blocks from the Capitol, which makes it a primo dining spot for legislators, legislative staff, and the lobbyists who love them.

The restaurant is contemporary, sleek, and airy.  The food and service are v good.

“You gets no bread with one meat ball.”

Well, actually there were three or four little pork and beef meatballs in this yummy starter, which came with house made cavatelli pasta, roasted garlic marinara, and pecorino.

I really wanted that bread. 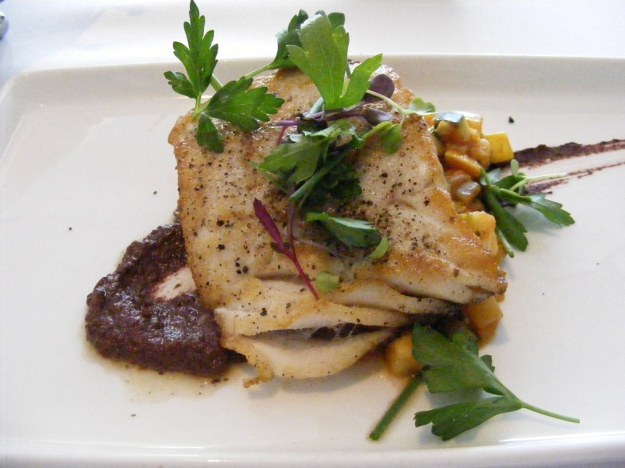 I know.  I ordered fish at a restaurant that has the word “Steak” in its name.  It seemed like a good idea at the time, and, since the dish was excellent, it still does.

This was Roasted Boston Blue Cod with ratatouille, a smoked eggplant purée, and a Nicoise olive tapenade.

It’s only in the last few years that I’ve come to really appreciate olives—I used to discreetly remove them from salads and the like.  How reassuring!  People can change!

But I still hate beets. 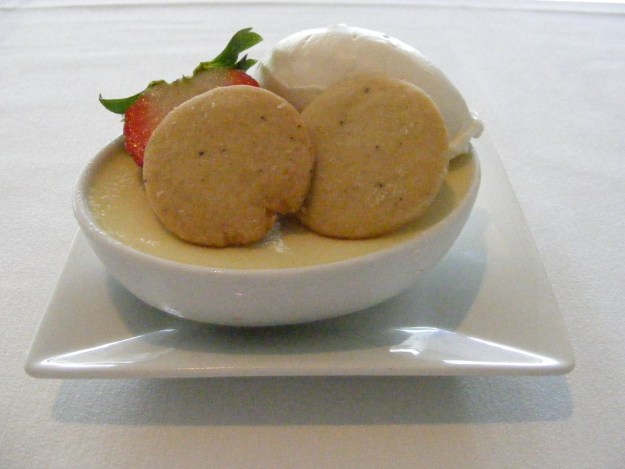 Lavender Pot De Crème, decorated with Brown Butter Sablé (those are the round shortbread cookies), and sweet cream.

A new one today:   My first visit to Spike Mendelsohn’s Béarnaise, on Capitol Hill.  Mendelsohn became a celebrity chef after his appearance on the fourth season of Top Chef.  He placed fifth, but he created a memorable impression, and he’s been all over TV ever since.

(It’s interesting how many Top Chef veterans have gone on to establish or enhance local, and in some cases, national reputations.  Contrast that w/another competitive reality show:   Project Runway contestants seem to just fade away, not unlike the way that Project Runway itself has dropped off the radar).

After Top Chef, Mendelsohn opened a DC burger joint called Good Stuff Eatery, which has become a favorite of President and Mrs Obama.  The burgers are small, but excellent—they’ve won national competitions.

He and his sister, Micheline Mendelsohn Luhn, opened Béarnaise on the same stretch of Pennsylvania Avenue a year ago.

My starter was this (cool) cucumber soup, a blend of cucumber. spinach, dill, mint, and Greek yoghurt.

Sliced filet on toast, with caramelized onions, aioli, and arugula.  The food was good and the waitress was pleasant, but the meal was less than perfect.   A hint:  If you’re going to have an open kitchen, remind chef not to repeatedly shout obscenities so loud that they carry all the way to the front of the house.   Diners aren’t really interested in hearing it.