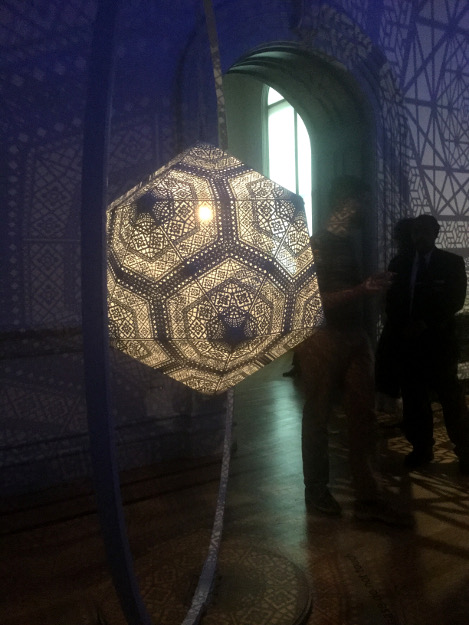 My earlier post about Burning Man at the Renwick took a look at the first floor of the museum and focused on artifacts. That part of the exhibition has now closed. The second floor, which will be open until 21 January 2019, is about environments.

These, uh, “things” are identified as “steel polyhedral sculptures” that “generate tension between hard geometric surfaces and soft interior illumination, promoting a sense of contemplation and awe of the inherent beauty of universal forms.”

(I made a note of the name and the description, because that’s the kind of stuff that comes up a lot in casual conversations.)

What fascinated me was the use of light and the everchanging colours. One of the “steel polyhedral sculptures” was large enough to hold several people inside.

The largest room in the Renwick is called the Grand Salon, and until the building’s most recent renovation, that was a perfectly descriptive name—it was heavy on the damask, and the walls were full of (mainly) 19th- and early 20th-century paintings by American artists.

The structure in the above picture hangs from the room’s ceiling. The photograph below, from the Renwick’s website, is a look at the full room.

At Burning Man in Nevada, these temples are among the things burned at the end of the festival.  That won’t happen to this one. The Renwick says it will be “on view indefinitely.” 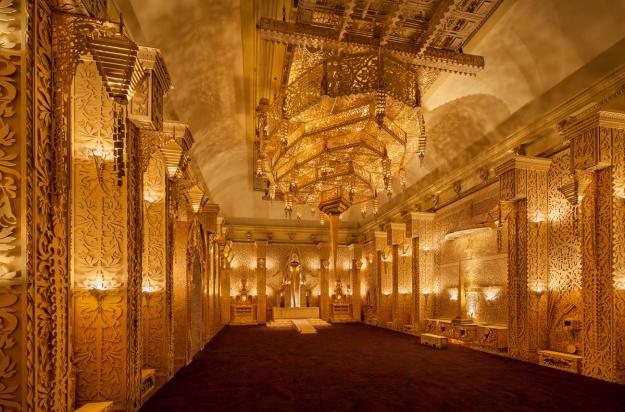 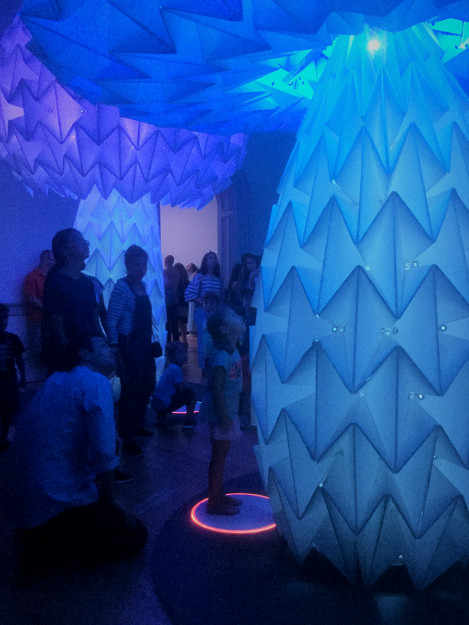 Oh, this was fun!

The giant “mushrooms” changed colour and seemed to breathe and grow when someone activated them by standing of the red-circled control panel on the floor.

The “Before I Die” Room

Last stop before the exit.

The Renwick set up a room, painted black and stocked with of coloured chalk, at the end of the Burning Man exhibition. Visitors were invited to write or draw a message about what they hope to see or do before they die.

Love, travel, drugs, self-fulfillment, and the future of Donald Trump were frequently mentioned.

The Burning Man exhibition has been wildly popular. Great show!

The Renwick Gallery, the branch of the Smithsonian Institution dedicated to American crafts and decorative arts, is currently presenting a knockout of an exhibition called “No Spectators: The Art Of Burning Man”.

Finally made my first visit a few weeks ago. 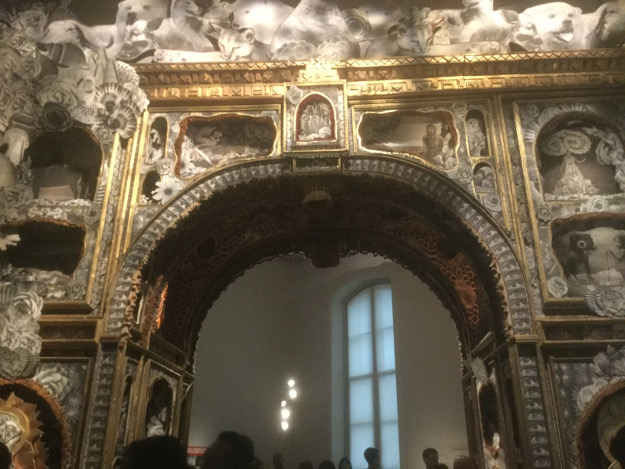 Admission to the Renwick is free. Tickets for this year’s Burning Man Festival in Black Rock Desert, Nevada, ranged from $190 to $1,200. 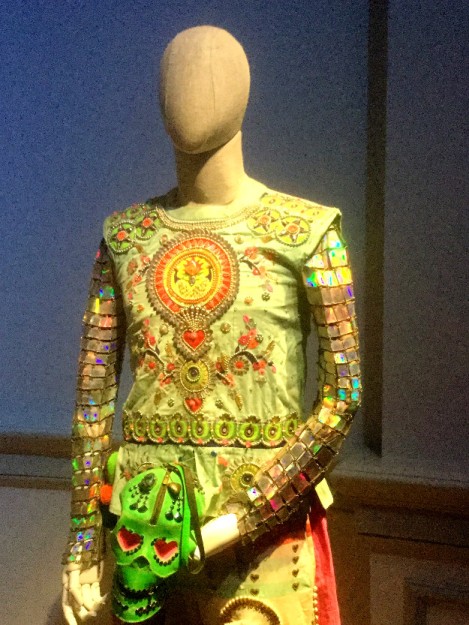 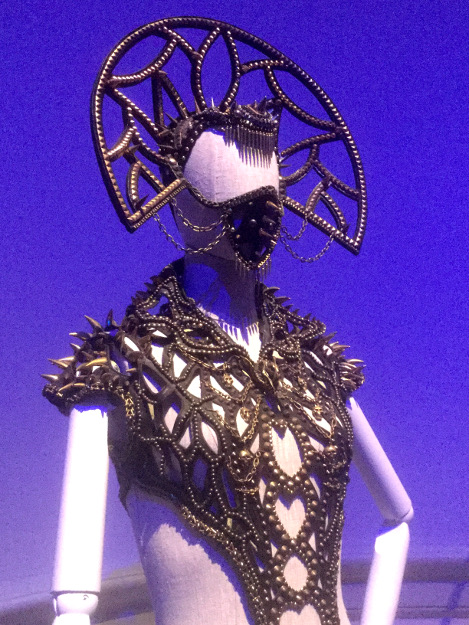 Last year, a group called Catharsis on the Mall asked for approval to install a 45-foot-tall sculpture of a nude woman on the National Mall, near the Washington Monument. For some reason, the National Park Service rejected the application.

What we did get was this artifact at the Renwick. She’s not 45-feet-tall, but she gradually changes colour.

The Inevitability of VR

No contemporary art installation is complete without a sampling of Virtual Reality. The monitor at the top of the picture shows a flat-screen version of what the user is experiencing in VR.

We’ve been hearing that the big VR breakthrough is just around the corner since—Let’s see now, Neal Stephenson published Snow Crash in 1992, and 2018 minus 1992 equals 26—more than a quarter-century ago. Gotta say, Oculus Rift is looking really tempting these days.

Today marks the 350th anniversary of the Great Fire of London, and what better way to observe the occasion than to start another big conflagration? 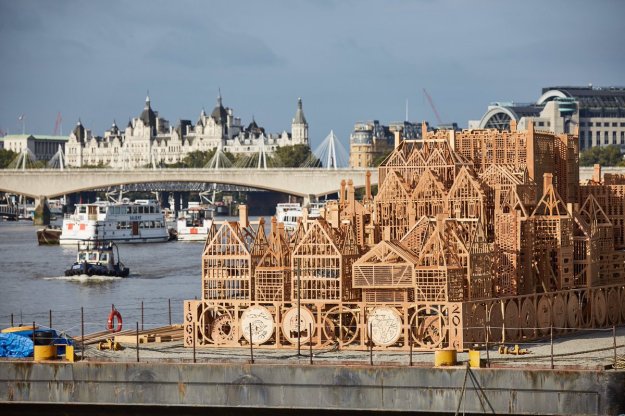 David Best, an American sculptor known for building immense skeletal structures and then ceremoniously burning them to the ground—he’s worked with the Burning Man festival—and an art installation group called Artichoke Trust created a 120 metre-long wooden sculpture of London’s 17th century skyline and moored it on the Thames.

The artwork, called “London 1666,” was set on fire and burnt in the middle of the river this evening.

All photos found n the Net,

We can only hope that no one reminds David Best that 2016 is also the 350th anniversary of The Great Plague.  Don’t want to give him any ideas.

Here’s the video coverage.  Unfortunately, the producers apparently decided that people would rather watch talking heads than the fire itself.

“What happens when you send the characters from The Maze Runner:  The Scorch Trials to an overcrowded music festival in the desert?  You’ll have to witness it for yourself.  Things will get toasty on The Playa. Welcome to the #BurnTrials!”

In addition to highlighting some of the internal contradictions of Burning Man, it uses anti-corporate language to sell corporate goods and services.  Too meta!

Burning Man traces its origins to a Summer Solstice celebration on San Francisco’s Baker Beach—how’s that for alliteration?—when about 20 people took part in the burning of an eight-foot high Man.   That was in 1986.

This year’s festival, with the theme “Carnival of Mirrors,” will have an attendance of about 70,000.  They’ll gather for “a celebration and a cultural movement…a fiery symposium of ideas, art, and technology.”   There will be a heavy representation of tech innovators—Elon Musk is a regular—and a fair number of people who are there to enjoy a week-long rave.  Admission this year is $390.

Here’s a short video about this year’s event:

While I’m reluctant to rule out any experience, it seems increasingly unlikely that I’ll ever spend the week leading up to Labor Day consuming massive quantities of Ecstasy and frolicking in the Nevada desert.  Stranger things have happened, but, off-hand, I can’t think of any of them right now.

I can, however, admire from afar.

Burning “Embrace”.  Found on the Net.

There’s been something of a backlash to Burning Man recently, but the 3,000 admission tickets, at $380 each, sold out pretty much instantaneously.