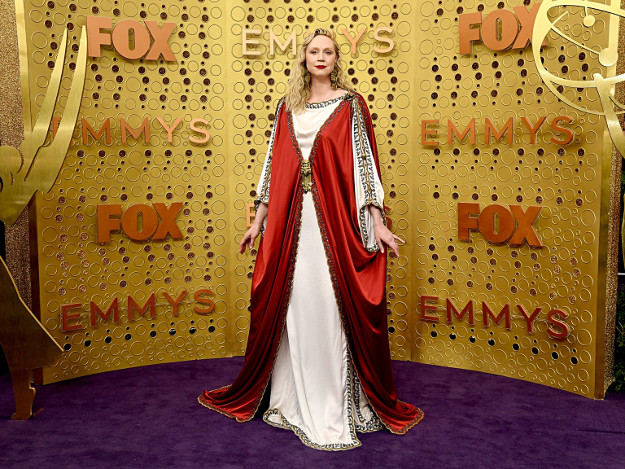 Look on her Works, ye Mighty, and despair!

The Alma-Tadema: At Home in Antiquity exhibition opened in London today, and the Leighton House Museum has just released this teaser.

I posted an item with some background information about Alma-Tadema, Lord Leighton, and this exhibition a few days ago, but, as my grandmother used to say, one video is worth a thousand words. Especially when the video is this well done. 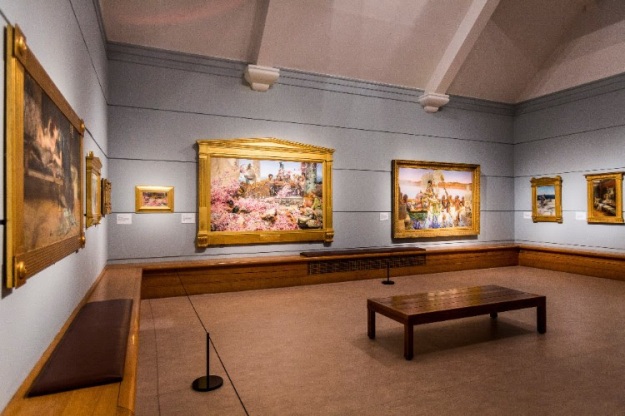 There are two places I always visit when I’m in London: The Victoria and Albert Museum and the Leighton House Museum in Holland Park. The V&A describes itself, accurately, as “the world’s leading museum of art and design.” It’s easily my favourite museum in this world, or any other. The Leighton House Museum is the former home and studio of Victorian artist Frederic, Lord Leighton, whose painting “Flaming June,” is one of the crowning achievements of 19th Century British art. 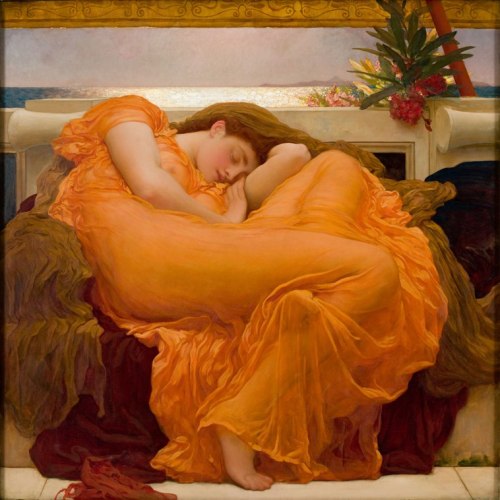 “Flaming June,” just because I can never pass up an opportunity to post it.

It’s an old, sad story. After the turn of the 20th century, Victorian artists like Leighton fell out of favour with both the critics and the public. And few of them fell so fast and so far as Leighton’s friend, Lawrence Alma-Tadema. By the 1960s, Alma-Tadema’s “The Finding of Moses,” the picture at the top of this note, was cut out of its frame by a gallery, because a buyer was only interested in the elaborate frame itself.

If I can work out the last few bugs on the time machine that I’ve been tinkering with, my first stop will be the 1950s, to stock up on Pre-Raphaelite paintings and Tiffany lamps.

Beginning this weekend, the Leighton House Museum is hosting an exhibition called Alma-Tadema: At Home in Antiquity, which includes more than 130 works. Here’s a sample: 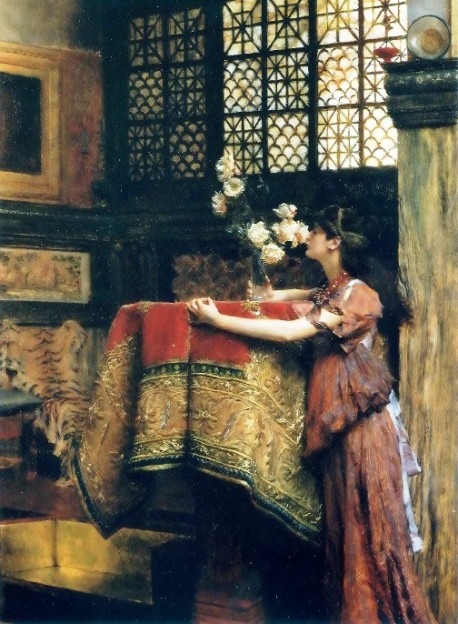 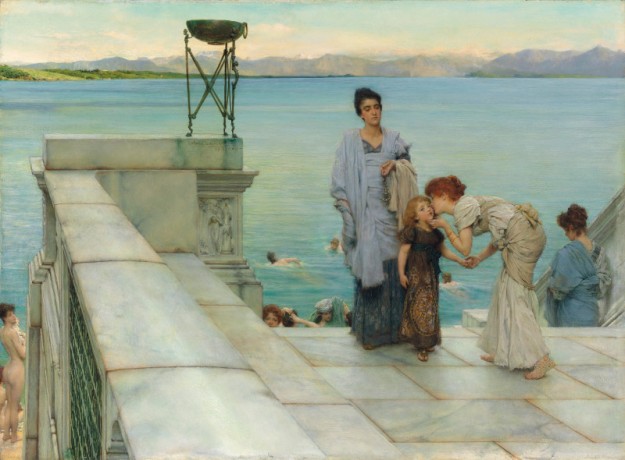 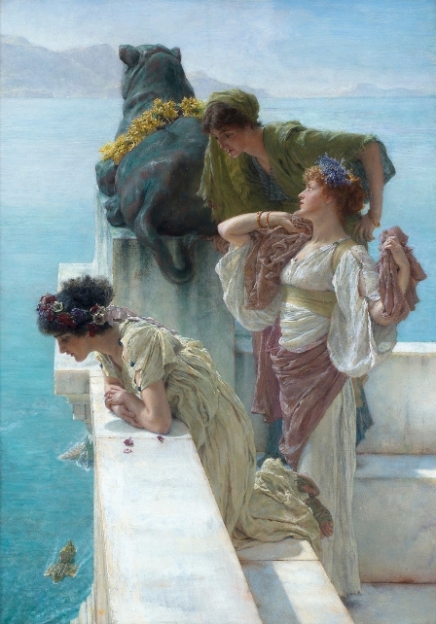 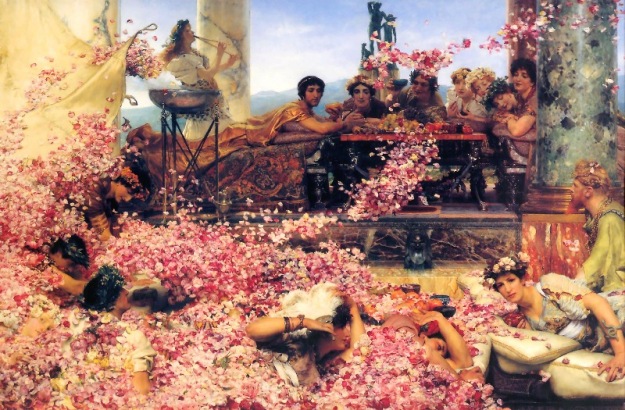 “The Roses of Heliogabalus,” posted for the same reason I posted “Flaming June.”

O, to be in Liverpool
Now that February’s there…

The Walker Art Gallery in Liverpool has opened an exhibition called “Victorian Treasures”,  which “brings together more than 60 outstanding Victorian paintings and watercolours from the art collections of National Museums Liverpool. The exhibition explores the work of leading 19th-century classical artists such as Frederic Leighton, Lawrence Alma-Tadema and Edward John Poynter. It also showcases work from pioneering Pre-Raphaelite artists including John Everett Millais, Dante Gabriel Rossetti and William Holman Hunt.”

With my love of Victoriana in general, and the Pre-Raphaelites in particular, I wish I could be there.

The painting at the top of this posting is John William Waterhouse’s “The Decameron”, which is part of the exhibition. Here are a few other paintings from the show: 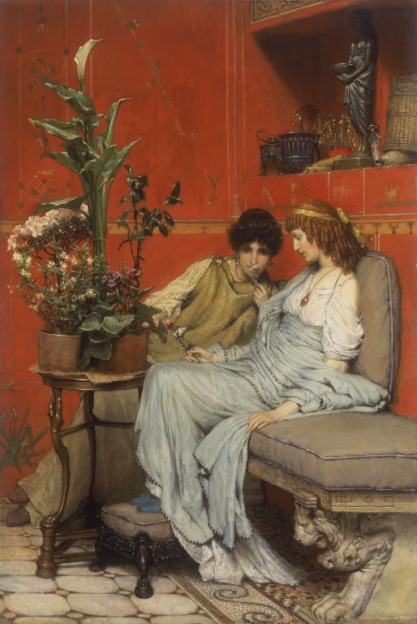 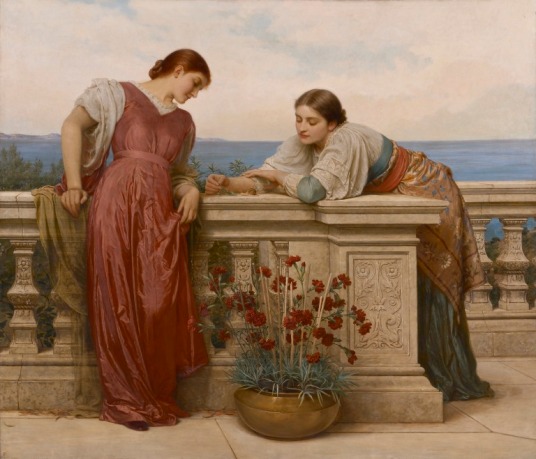 I’m going to remember the title of this picture. “Dolce far Niente” can be translated as “the sweetness of doing nothing”. 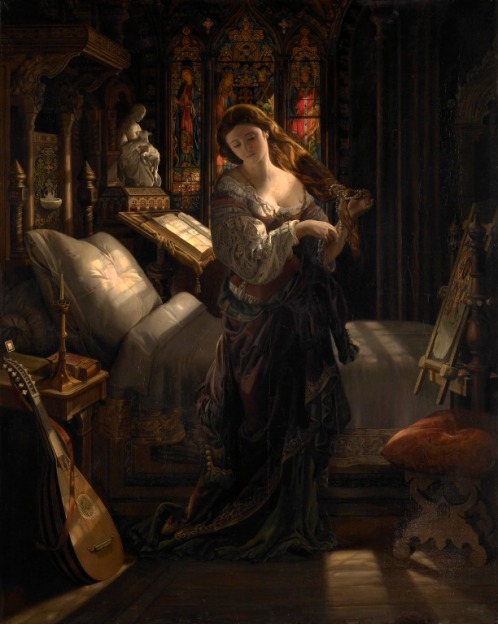 “Madeline after Prayer”, by Daniel Maclise

I used to post a regular item I called Sunday Morning — Victoriana of the Week.  Haven’t done that for a while, but here it is Sunday morning, and I’m reviving it for one day only.  Something showed up on my Tumblr feed that combines two of my favourite things, right up there with raindrops on roses and whiskers on kittens:  Pre-Raphaelite art and Game of Thrones.

A Swedish site called TimjanDesign has juxtaposed details of famous Pre-Raphaelite paintings with pictures of Sophie Turner, who’s otherwise known as Sansa Stark on GoT.  Here are a few of them.  Find more at the link. 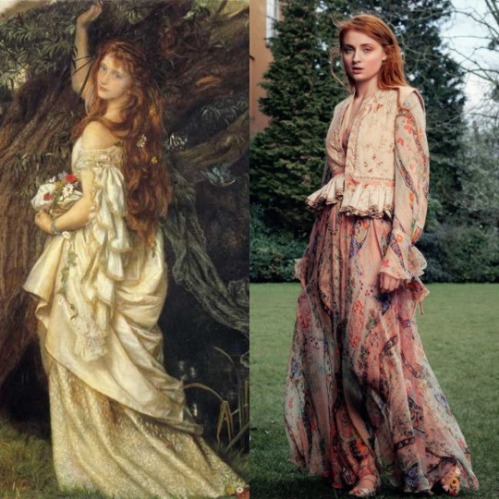 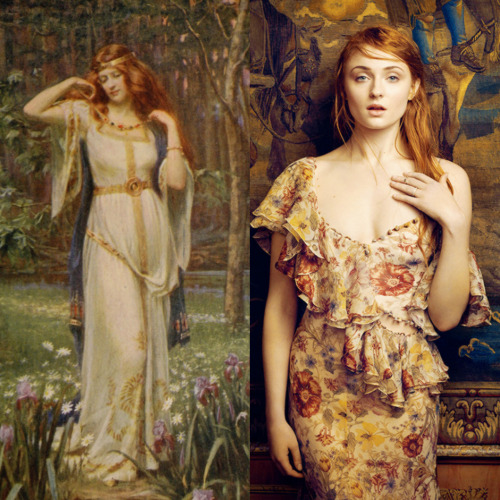 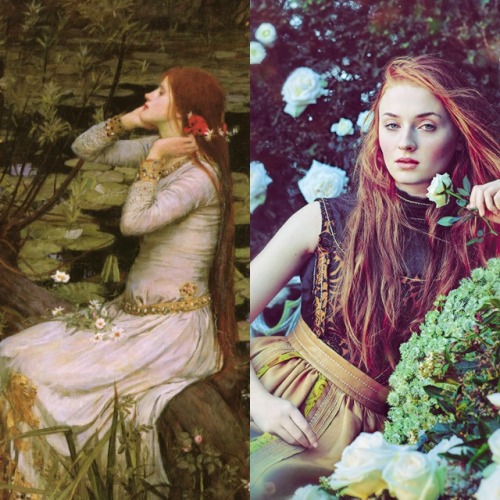 If anyone ever makes a movie about the sad, tormented life of Lizzie Siddal, I’ve got a suggestion about who should play the lead.

Found this gorgeous Tribute to Eleanor Fortescue-Brickdale on YouTube.  To fully appreciate it, watch it in full screen.

I’ve posted about Eleanor Fortescue-Brickdale in the past, here and here.  She was born in 1871, which makes her a true Victorian, but she lived until 1945.  Her longevity, combined with the style and subject matter of her paintings, are the reason she’s known as “The Last Pre-Raphaelite”.

I used a detail from her painting “The Deceitfulness of Riches” as the header on this blog for most of 2014.  I’ve temporarily restored it in her honour.

This is the final episode in the BBC three-part series on the Pre-Raphaelites.

You can see the first part here the second part here.

More Songs about Buildings and Food
Blog at WordPress.com.