The London Fashion Week collaboration between the Leighton House Museum and British fashion photographer Ram Shergill continues.   Shergill has been coupling his own photographic works with specific paintings by Leighton.  This is the fourth of five match-ups.

They seem to be getting more literal.

“I particularly like this image of Leighton’s ‘Head of an Italian model’ as it has a certain realness about it.  I love the darkness of it as it takes me right back to the time when I first started photography.  There is something quite dark and macabre about this portrait.The image reminds me of when Alexander McQueen showed me some of his art and photography books and said that he was into ‘the macabre’ – something that mesmerized me.  This image captures a ‘sensual’ macabre for me as it is a magnificent portrait of a beautiful profile. But there also seems to be something sinister in the way the subject is looking up as if to pray, or to perhaps reflect on something that he has done or is intending to do.  Since meeting McQueen, my work has always contained this edge. The palette is similar to some of the great paintings by Caravaggio who has inspired various works by me.  The lighting lends itself to the display of light-coloured fabrics in combination with the pale skin tones of the human body.”
—Ram Shergill

I spent the first two weeks of Spring in London this year, and one of the things that influenced my choice of time and location was the scheduling of two exhibitions that I really wanted to see: A Leighton House exhibition of 50 pictures from the Pérez Simón Collection, including Sir Lawrence Alma-Tadema’ s “The Roses of Heliogabalus”, was in its final days…

…and an Alexander McQueen retrospective was opening at my favourite museum, the V&A. 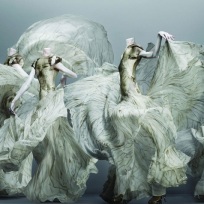 It never occurred to me to link the two.